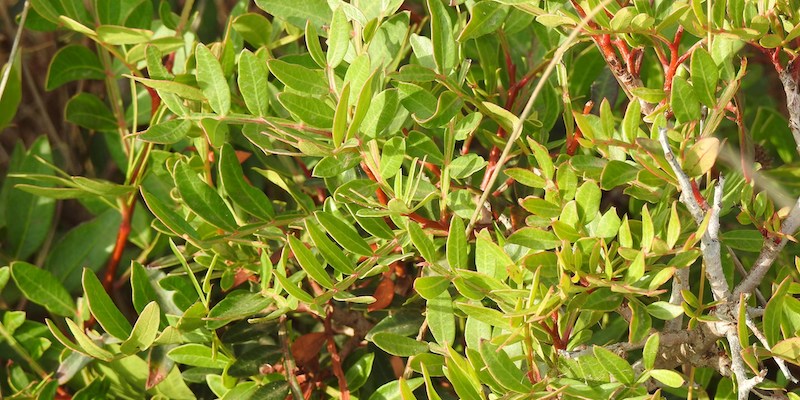 Biodiversity of the pseudo-steppe in the Park of Coastal Dunes: the Lentisk
Overview

In spring, along the pseudosteppa fossil dunes and the blades, it is possible to observe the flowering of the Lentisk (Pistacia lentiscus, L. 1753), a plant belonging to the “Anacardiaceae” family and from the “Pistacia” genus.

The name of this genus comes from the Greek “pistákion”, assonant with the Persian “pistáh”, that is “rich in flour”. The term lentìscus (from the Latin) means “viscous” probably referring to the liquid that can be obtained from the plant.

This habitat occupies the internal part of the innermost dune bars where the sand is more compact. The fruit is a small, edible berry, initially reddish and then, over time, will become more and more black. In some areas, the fruit of the mastic tree is used as an ingredient in soups in combination with legumes.

It is one of the most widespread and representative shrubs of the Mediterranean scrub, and is often associated or confused with the olive and myrtle.

Thanks to its frugality and good resistance to fires, it is also quite frequent in bushy pastures and in the most degraded residual areas of the scrub, more towards the hinterland.

From a historical point of view, there was a tradition linked to mastic oil used as a food fat, which lasted until the mid-twentieth century, when it was replaced by the use of olive oil.

Another curiosity concerns the resin of the mastic tree: it is called "mastic", it is yellow and was used in the past as chewing gum, also for its beneficial action on the oral cavity (firming the gums and purifying the breath).